When I first heard the expression baby led weaning, I didn’t think too much of it. I’m not big on parenting fads, and I have never really taken parenting models and books very seriously; baby led weaning seemed to me something people took a bit too far. I still think that people do go a bit over the top with it, but then there are extremists in everything. I approached it very open to the fact that we may not stick to the book.
We didn’t really stick to the book, the book being Gill Rapley’s; I became a bit of a baby led weaning fan due to how much it matched my lazy nature.

When my daughter was 5 months old, I and my husband had a discussion about weaning, I didn’t want to start early but he did. We both did research on it and in the end we discussed it and I agreed with him to start weaning. We didn’t do this in any particular fashion, more than anything else it was because we wanted to give her as many flavours as we could early on in a hope that it may make her less fussy (which was a massive concern of mine as I was super fussy as a child, I only ate sausage and chips).
So we started with puree, it was a bit of a pain to be honest as we found ourselves constantly blending and freezing and melting. She only has a few tea spoons per meal, as to not put her off her breastmilk. She took amazingly to food, she loved it (and still does) it was quite amazing how many different foods she would eat (her favourite was broccoli!). Eventually I got a bit fed up, and after my friends convinced me to, I begrudgingly looked in to baby led weaning. 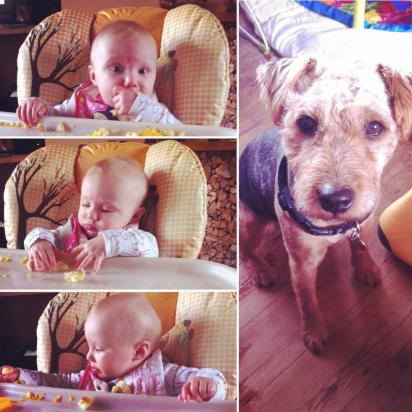 I’m not really sure now what put me off so much, I think the mess and more than anything else I was petrified of her choking. I researched the gag reflex for days before I finally felt ready to have a go. Baby led weaning is definitely something they have to be ready for before you start.

Things babies need to be doing before starting:

– Reaching for things and putting them in their mouth (They never stop this once they’ve started, even if the said item is disgusting i.e. old spaghetti from under the cupboard).

– Being interested in your food and trying to get it (This also never stops, be prepared to share all your meals for a while).

So Baby led weaning is fantastic, after I super poo pooed it at first. The ease of it is unbelievable, apart from the mess, but if you have a dog that really doesn’t matter. The thing is, eventually you have to let them eat by themselves, and just because they were spoon fed doesn’t make them have great toddler table manners. No toddler has great table manners. Well I’m yet to find one.

The mess isn’t all too bad anyway, mostly when they first start its all chip shaped food like mango, cucumber, pineapple, broccoli and so on; so when its chucked on the floor, it’s easy enough to pick up again. The older they get, the more mess there is but I found that as she got older, she was more interested in eating it rather than chucking it.
I was never one of those that refuse to spoon feed though. If we ate soup I would help her with it, and often desert was on a spoon; I know there is a big thing in the baby led weaning community about never using a spoon. I’ve seen all sorts of comments floating around the internet, some super extreme people even suggesting that it’s abusive (which is idiotic in my book). Like I said we have never been by the book parents and kind of just go with the flow.

The things I found the most difficult about baby led weaning was not something I had expected, teaching my parents and family members about it. It was a foreign concept to give baby’s solid food in this way back when I was a baby (my mum assures me) but my mum warmed to it massively, she has even said that, she wished she had have done it with me, as I ate nothing as a child.

The best thing about baby led weaning from my experience though is how much variety my daughter will eat now. She will eat anything (except tomato’s or mushrooms, but that’s personal preference I guess) Olives, sardines, any kind of fish actually, spicy food and believe it not she loves broccoli! Now I’m not daft enough to think this is solely down to baby led weaning, it could be for a number of reasons, and she may have never been a fussy child no matter what we had done. We are very chilled out about meals too, if she doesn’t eat it, it goes in the bin, we know when she’s done and we don’t try and encourage her to eat more than she wants to eat. She goes through periods of trying it on at meal times, but we generally don’t make a fuss of it.

Another plus was, that I actually enjoyed cooking the food, I love cooking anyway (which I know many people don’t, there are easier approaches if you don’t) so it was always a bit of fun, and now she is older I do try and get her involved with cooking, like mixing, not boiling and frying things.

The last brilliant thing about baby led weaning (though I’m sure there are many more) is that you can mostly give them what you eat (with a few minor adjustments, like not adding salt and making it into an easy to grip shape). We did mostly give her what we ate and vice versa (as many of the baby led weaning recipes are really tasty!)
Today Joanie will pretty much eat everything we give her!